Today I continue my interview with France Rivet about her journey to uncover the fate of Abraham and his fellow Inuit travellers.

I asked France, “Why is it important to share the story of Abraham and the other Inuit with the world? What do you hope might be a result of sharing this story so widely?”

Here’s what France had to say: “Recently, I attended an event at the National Arts Center in Ottawa related to the truth and reconciliation commission. One of the ladies who spoke talked about how important it is for each society to tell the stories of its heroes. In my opinion, Abraham is one of the Labrador Inuit’s heroes. Inuit and non-Inuit all have something to learn from his resilience, his strength, the non-aggressivity he has shown despite the hardships he was going through, despite being lured and lied to. These are universal values for all human beings.

I also hope that sharing Abraham’s story with the world will contribute to raising awareness about Nunatsiavut. 99.9% of people I talk to have never heard the name. They have no clue where it is located on the map. Many know of Nunavut, of Nunavik, but I regularly get blank faces when I mention Nunatsiavut. 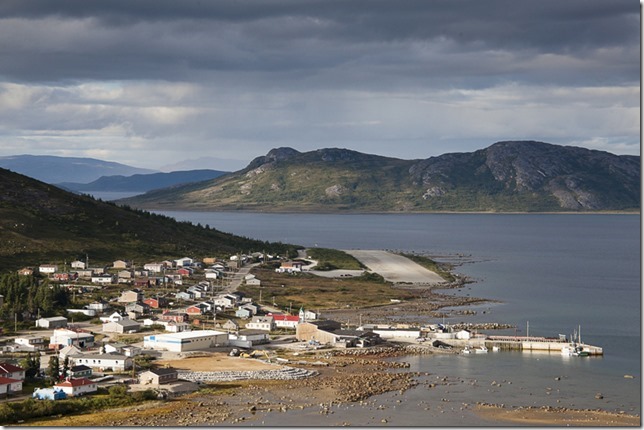 Nain, the administrative centre of Nunatsiavut. That’s where the government offices are and the repatriation policy is being written

Finally, I hope that hearing about this story will show people that anything is possible. Six years ago, I would never have believed that an ordinary citizen such as me could accomplish what I have done. For example, in my mind, it was simply impossible for a regular citizen to visit the reserves of world-renowned museums, or have his/her actions result in a Prime Minister and a President signing an agreement! No way! That had to require weeks, if not months, of discussions among top political advisors. One thing this project has taught me is that when you trust life and give it the time it needs to set the stage properly, miracles do happen. It has now happened too often that the right people appear on my path at the perfect time, that something didn’t go as I had planned, but in the end, it was for the better. I keep moving forward, but I no longer fight when things don’t go as fast, or exactly as I would like them to. I know that there is a reason for it, and that eventually I’ll understand what that reason is. What has become most important for me is to let my “little internal voice” guide me. It always knows what is best for me. If things don’t feel right, if there is too much negativity, it is a clear sign that I’m not on the right path, and I am no longer afraid of letting go of them. I know that it is making room for the good things that are awaiting down the path. I have learned how important it is to persevere, and to collaborate with others! If my experience can benefit someone somewhere then it will be a step towards a better world.”

Abraham, his family, and the young Inuk who accompanied them to Europe

I think France touched on some really important points about why it was so important to share this story with the world. I would also add that there is an expression that says, ‘history repeats itself’. I actually feel that our job is to make sure that history does NOT repeat itself, that the terrible things that have been part of human history do not happen again – that we learn from these tragic events and do all that we can to ensure something like them never happens again.

I also share France’s  philosophy, that things happen for a reason and that sometimes we are guided down a certain path in life, despite our thoughts that we might be veering off course. Sometimes the universe just has plans for us that are different from our own. But the lead us to where we need to be.

Nunatsiavut Minister of Education and Economic Development, Patricia Kemuksigak, discussing with France Rivet after the world premiere of “Trapped in a Human Zoo”. Photo taken by Sophie Tremblay-Morissette/Nunatsiavut Tourism